This was the subject of an e-mail I sent out to all myfriends who live in Durban North.  I wasgatvol with my doctor and was looking for another “quack” to give myhard-earned Rands to.
Just like with mechanics, plumbers and electricians,  we do not question doctors because they are sovery qualified and clever and can sprout words that make absolutely nosense what so ever to us.  I strongly object to being treated like an ignoramus and so I make sure I do my research (thank you, Google) beforeand after every qualified person appointment.
So, the Alien had a cough. No big deal I hear you say, except the cough continued for months. Ournow ex-GP treated me like I was a neurotic, overprotective, Munchausen by proxy freak.

A general warning: Don’t mess with any mother with more than1 brain cell, clever people!  We aregenetically programmed to protect our young. We will kill forour offspring even if they are teenagers.

Once ex- GP finally started taking my concerns seriously I wasexposed to the overwhelming and scary concept of spending money quicker thanyou can earn it.  How do thesespecialists and laboratories decide on their exorbitant prices? Are they basedon their Mercedes and Ferrari repayments?
After 3 weeks of emptying my purse, bank balance and lifesavings, selling a kidney and gaining shares at the Pharmacy besides thefrustration of not knowing what was wrong with the Alien – I have a healthydaughter and a newfound respect for radiographers.  Doctors and specialists do not even look atthe “pictures” that radiographers take. They base their decisions purely on thereports the radiographers send them (and how much money they need for theirnext overseas vacation) 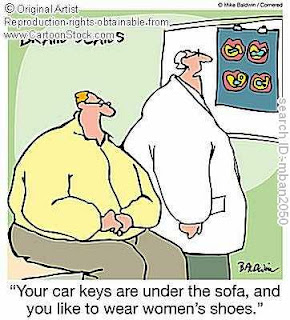 To the folk who took such …errr…revealing photos of mydaughter, you are my heroes. You may have the crappiest selection of ancient magazinesin your waiting room but you were the voice of tangible, understandable reasonthrough the medical nightmare I have just emerged from.  A bargain at the price.

6 thoughts on “Is there a Doctor in the House?”