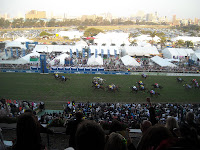 I felt very privileged to be invited to attend the Durban July at Greyville this past weekend. To a box, nogal! Having never been to the races I had no idea what to expect so here is a virgin race goers account of a day at the races…..

The theme of the day was “A blooming day at the races” so that kinda meant that sticking a flower in your hair and wearing a florally dress qualified you as being dressed appropriately. Okay, that is what I thought. How wrong was I! Yes, there were some very elegantly dressed folk and there were some eye catching outfits that were a tad over the top but still tasteful. Then there were some scary apparitions! How any mother/husband/boyfriend/friend could allow some of those ladies out of the house, never mind into the unsuspecting public, I have no idea. I cringed with embarrassment for some of them….

Anyway – no one in our box was dressed like a freak so I will not allow that to dampen my overview of the experience.

On to the horses. I like horses. What is not to like about a horse? I prefer them at a distance though. Let me just explain that I was thrown off a horse when I was a youngster. The horse I was riding on was spooked by a foreboding looking wheelbarrow that emerged from a side road. The key problem was that one of my brothers was also riding the horse with me at the time. I suffered not only the pain and indignity of landing on my arse but also having my youngest brother falling on top of me!

So, how did I relate to the horses at Greyville? Exceptionally well, thank you. I could view them from my perch high above the crowds and marvel as to their beauty and power (and the pretty colours worn by the jockeys). 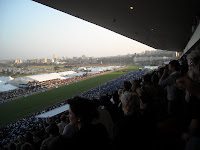 I soon realised that, in order to get the most out of the day, I would have to go against every moral fibre I have and place a bet or two. Knowing nothing about horses or the dark world of gambling, I had to rely on everyone else’s opinions. The “race card” that I was handed looked more like a miniature Yellow Pages and was just as dull to read so I gave up on the idea of making any decisions based on that. I placed a few bob on a horse or two to “run a place” (I liked that idea – leaves the possibility of winning something wide open) but alas – all my expert advise led to naught and I lost all the boodle. No money flowing into my grubby paws from the helpful young tote dude.

What was flowing in abundance though was booze. When I left and had to pass through the marauding masses to walk the +-12 kilometres to where the car was parked, there was hardly a sober person in sight. Young and old, black and white, freaks and gentry – all totally trashed! I can understand though. The adrenaline rush when the horses pass the finishing line x 12 races + the amount of one’s life savings lost on donkeys ÷ by the number of frightening outfits = a darn good excuse to get wasted. Phew, I hope they all crawled home safely.

One downside was witnessing a huge brawl which I later learnt resulted in 2 people being stabbed. Hubby was delayed in picking up the Alien because he had to dodge the flying fists and cop vans in order to get out of the place. Yes, Chicken Man was there but he was not in the box with me. He had to slum it amongst the plebs as he was tasked with entertaining clients. Okay, so he was in the Sharks tent rubbing shoulders with rugby legends and being plied with food and Flasher girls. He too was a Durban July virgin and declared the whole experience an absolute pleasure even though there was not a Black Label in sight and he had to drink some other headache inducing beer. 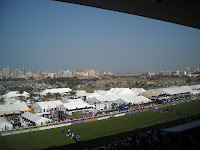 So, thank you Lauren and Rob for facilitating my blooming great day at the races. I may have lost a few bucks but I have gained some wonderful memories spent with great friends. Now if I could just get some of those awful outfits out of my head…..

5 thoughts on “The Durban July – not for the faint hearted.”