“I am a looser”
“You just don’t understand, my life is over”
“I am not going to have any friends”

All these passionate, sometimes hysterical pleas from the Alien have been getting the same standard response from me:

I hear your gasps of horror from here. This mother has an emotionally disturbed, possibly unstable teenager and her response is “Ag Shame”? Relax! I did take the time to listen to the reason why her life was teetering on the brink of extinction.

The child does not have a BlackBerry.

Can you believe it? Even though she has a perfectly good Nokia somethingorother phone, a computer, the choice of 2 TV’s with DSTV and a DVD player, a pleasant roof over her head, a swimming pool, 3 adoring cats, 1 devoted dog plus a cupboard full of clothes – the child’s life is a misery because she does not have a BlackBerry Pin Number.

How sad is that? I am not totally heartless, you know. I was once a teenager and understand about peer pressure and all that psycho babble. It really is pathetic that a beautiful young girl can feel that life is passing her by because she does not have a particular make of phone. Talk about a fickle society.

Apparently all the kids who used to be on MXit have closed their accounts and are BB Messaging each other now. SMS is clearly so last week and actually calling a person and talking to them is what old people like me do. I suppose I could alleviate her misery just a tad if I allowed her to have Facebook but I see what some of these teenagers do and say on Facebook so question if I want to expose her to all that.

So, until her contract is due for an upgrade, I will just have to endure the endless whining and complaining. The advantage is that, because she no longer knows what is going on in the world around her because of her forced isolation thanks to her BlackBerry’lessness (cool new word that), the Alien can spend more time moping around me.
Hang on…did I just say advantage?
Anyone getting rid of their BlackBerry? Anyone? 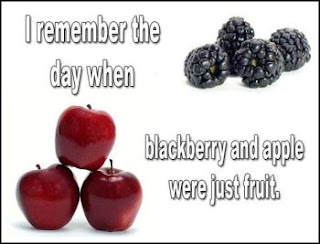 4 thoughts on “The Alien is Alienated”