The comment on my Ubuntu Girl blog begs explanation. Hopping into my car to go and pick up the Alien from school is not a walk in the park. I firmly believe that I take my life into my hands the same as people who bungee jump off bridges using dental floss instead of rope.

I live in Durban North. Unlike the notion that there are tea-rooms/cafés on every street corner in Durban – in Durban North they have schools. There are schools everywhere. 2 to 3 schools to every street. Seriously, if you want to go into a lucrative business, open a chassis company in Durban North. With every school comes hundreds of speed bumps the size of Table Mountain just waiting to stuff up your undercarriage.

Having said that, it blows my mind that I seem to be constantly stuck behind an old person every time I go to pick up the Alien. How is that possible? If Durban North is full of schools – where do these old people come from? What are they doing trawling the streets of Durban North? Is there a policy of old aged homes to school ratio published in some government gazette that I do not know about? 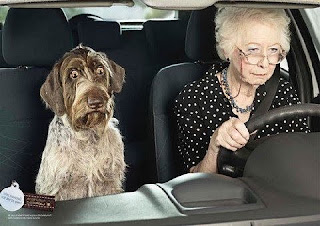 Don’t get me wrong. I love old people. I just don’t believe that they should be driving once Alzheimer’s has set in and they can no remember why they are in a car let alone the fact that they are actually the driver. Clearly senile dementia is popular amongst the Durban North senior citizens

I have a low patience threshold when driving. I have mentioned my propensity to drive like Schumacher hence being stuck behind antiques who have forgotten they are driving cars and not ox wagons, does tend to test my every red-haired nerve fibre.

Once I get to the Alien’s school (more than likely late thanks to the old folk not remembering how to get out of 1st gear) I face a different road rage challenge. Mothers of teenagers – I have news for you. Your precious, precocious brats ARE capable of walking more than 20 steps from the school gate to your car. There is absolutely no reason for you to block the entire road so that Her Highness does not have to walk too far to find you. Bus drivers – the vehicles you drive are very visible thanks to their size. You can park slightly further away from the gate. The Aliens will find you. You are hard to miss. 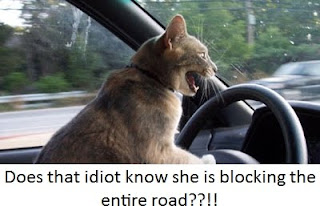 Yep – the afternoon school run is harrowing. The Alien always looks a tad nervous when she gets into the car as she is tentatively waiting for the cussing out of parents and the geriatric population in general.

When I manoeuvre my car into the garage after each school run I breathe a sigh of relief. I have dodged the bullet yet again. Or, maybe more correctly, fellow parents and the elderly have dodged my bullets. Until the next day….

p.s. – you may notice that my blogsite has had some surgery. A nip and a tuck here and a bit of botox there and voila! – My blog has done a Michael Jackson- like transformation. You like?